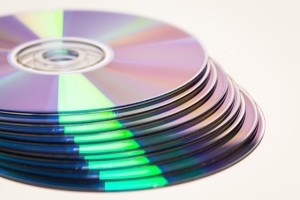 It’s the age-old question. Do I go Blu-Ray or do I go DVD? While new technologies traditionally supplant old ones fairly quickly, Blu-ray discs and DVDs seem to have been sitting side-by-side in the market together for some time. So, what’s the difference between Blu-ray video and HD DVD videos? What are the pros and cons of each, and is one better than the other?

Fortunately, on this issue, there is actually no debate. It may surprise some DVD fans to learn that Blu-ray is unequivocally better on pretty much every level. Let’s break it down.

Blu-ray discs have more storage capacity — a LOT more. A standard DVD holds 4.7 gigabytes of data. This is enough to hold one movie. If that movie is longer than two hours, you need two DVDs or a double-layer DVD that can store around 9GB. On the other hand, a double-layer Blu-ray disc can hold a massive 50 GB of data.

Image resolution just means how your picture looks when you are viewing the disc, which is usually all people really care about. When looking at the DVD vs. Blu-ray resolution, Blu-ray easily wins this battle, too. A DVD is a standard definition device. You won’t get high-definition movie viewing on your DVD, just 480 SD. On the other hand, Blu-ray is made for HD, and you’ll get the best picture possible, with 1080 HD capability for your Blu-ray movies. So if you are looking for a quality picture, Blue Ray is the clear winner. 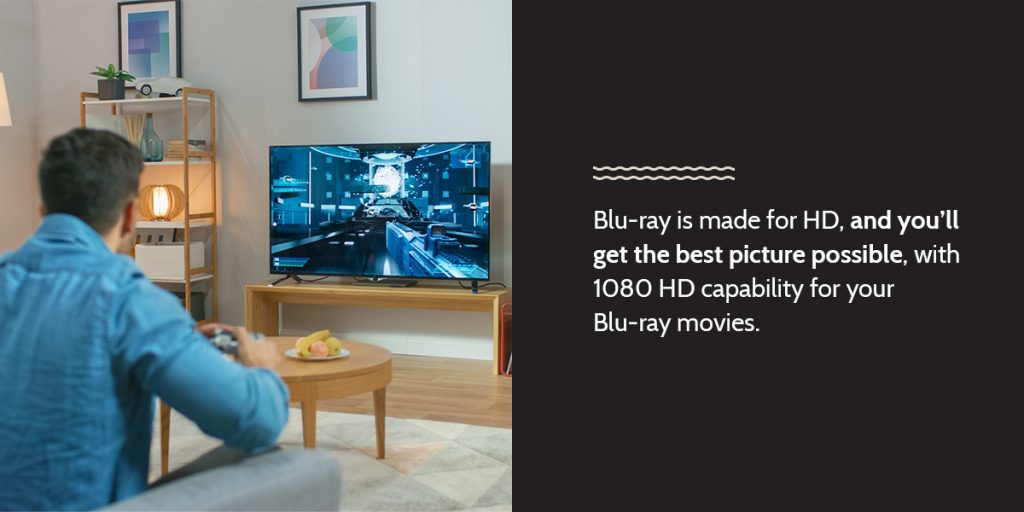 In 2016, Ultra HD Blu-ray was created, allowing for developers to encode more information on the discs in 4k resolution. If you have a newer player capable of playing Ultra HD Blu-ray discs and a compatible 4K Ultra HD television, this technology can give you an even better picture.

If crisp audio is an important part of your viewing experience, Blu-ray can be the winner. Blu-ray discs can include audio formats such as DTS:X, Dolby Atmos, DTS-HD Master Audio and Dolby TrueHD. If you have a home theater set-up that can decode these formats, you can achieve theater-like sound. If you want more than the Dolby Digital/DTS, your audio system will have to be up for the job. 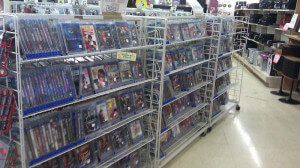 Both DVD and Blu-ray players use lasers to read the discs. The difference is that the DVD laser is a red laser that works at a 650nm wavelength. The Blu-ray laser is — you guessed it — blue and works on shorter 405nm wavelengths, meaning they can read information more closely and precisely.

Blu-ray Disc players come with some advantages DVD players don’t have. Most modern Blu-ray players can play streaming content from the Internet and content from other devices, including flash drives. Even if you have DVDs, switching to a Blu-ray player and playing your DVDs on it can improve the quality of the audio and video, thanks to the upscaling feature of the players.

In 2013, analog connections were removed from Blu-ray Disc players, meaning modern players have an HDMI connection.

DVDs and Blu-ray discs look the same to the naked eye, but the Blu-ray’s grooves are much closer together and thinner since the blue laser can read more precise data. This is what enables the Blu-Ray disc to store so much more information. Blu-ray discs are also more scratch-resistant than DVDs.

The Case for DVDs

So, is it time to throw out all your DVDs and replace them? Maybe not quite yet. If you are wondering can a Blu-ray player play a DVD – It can!  All Blu-ray players can read and play DVDs, so you don’t have to if you don’t want to buy the same movie twice. If, however, you do not have a Blu-ray player, you won’t be able to play Blu-rays. The DVD laser is too big to read a Blu-ray disc.

Secondly, DVDs are currently cheaper than Blu-rays, so if you’re not looking to spend the extra money and don’t care that much about picture quality, you can still buy DVDs. You also may not be able to find the movie you want yet in a Blu-ray format.

Another reason to hold onto your DVD collection is many of the visual benefits of Blu-ray are visible on HDTV. If you have an older or smaller TV, you may not see a huge difference in video or audio quality by making the costly switch to Blue-ray. Many people also like the nostalgia of DVDs — you don’t always need the latest tech to enjoy a good film.

The Case for Blu-ray

While DVD is still a viable video format, there are more than enough reasons to switch over to Blue-ray. It all boils down to quality and access. Blu-ray presents a few game-changing quality improvements over DVD, including:

Blu-ray is going to be the best way to get a high-quality home video experience going forward. 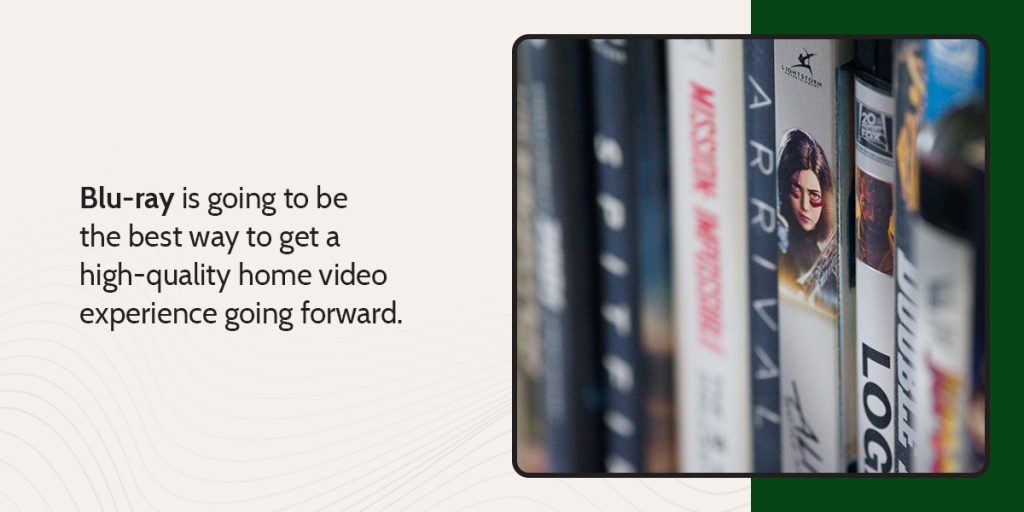 Whether you prefer DVD or Blu rays or both, we have them at Record Head.  If you are looking for a DVD player or want to invest in a Blu-ray player, and you can find extremely affordable ones at Record Head in West Allis, Wisconsin as well.  Please stop by our store at 7045 W. Greenfield Avenue to complete your collection.

« The Best Way to Listen to Music